After trying at least six different eBay imports, my favorite imported high speed handpiece is the Skysea SKED-A6.  It's a large head handpiece with lots of torque for prepping crowns.

Shop for the Skysea SKED-A6 here on eBay.  Make sure you get the version pictured above with the black band coupler.  Do not get the B6 version unless you already have that specific coupler connection in your office already. It should run you about $90-100 shipped with coupler included.  You will need one coupler per dental unit, and I would have one spare coupler at all times.  Save those extra o-ring baggies in a safe place.  It takes a really long time for these couplers to leak, but when they do, you'll want extra o-rings on hand.

EDIT 7/13/2018: These SKED handpieces seems to run a tiny bit larger at the connection than the others I use. They are now leaking water at the coupler.  I've changed the o-rings on the coupler without success.  So I'm less bullish on these handpieces as I was when I wrote this originally.

If you want to make it last three times longer, get the Skysea SKED A6 packaged with 3 replacement turbines.  All my favorite handpieces from ebay have had this gold turbine in common. When the turbine fails, just swap it with the included tool. (it's a flat piece of metal with a notch cut out of the side.  don't throw it away)  It's a very easy handpiece to repair.

In case you didn't know, the Kavo multi-flex quick connect is well established, reliable, and out of patent.  So lots of companies are using that swivel standard.  It's a big reason I decided to invest in this particular coupler system.  The Skysea SKED A6 comes with the multfiflex couplers above.  They have been very reliable for me. There are more expensive $200 versions from Vector and mkdent, or the even more expensive original Kavo couplers.   But the most cost effective way to get them is to buy a handpiece with the coupler thrown in.


4 hole tubing trick: if you like this handpiece, but have a four hole tubing, you can sacrifice the LED lighting and simply cut off the two tiny electrical pins on the coupler.  The quick connect will then fit any standard four hole tubing.

Alternatively you can buy a 4 hole coupler with an e-generator built in.  This lets you keep your standard 4 hole tubing and have light for your high speeds.  One downside with e-generators is that they are RPM dependent.  So the faster you spin, the brighter the light gets.  If you are pedal to the metal all the time, this would be less of an issue for you.  If you vary your speed a lot, then the lights will brighten and dim a lot.  I was told by my first employer that varying your rpm speed was a bad habit I needed to break. :)

If you already have the couplers, a solid $60 pick

ADDED 5/10/2017 - This is the updated version of my favorite ebay handpiece, the YBB-T-M4-SU. Look for the "wavy handle grip" high speed.  It also uses the golden turbine and triple water spray.  Just got three of them for $180 shipped, kavo multiflex couplers not included.  That's $60 for a pretty good crown prepping handpiece with fiber optic headlight, swivel, and 3 port spray.  As is typical for eBay Chinese handpiece listings, the photographs don't always match what you actually get.  The photographs say "Sandent" but I got the same handpiece with the "Yabangbang" brand.  The clincher for me was clicking onto the fifth or sixth photo and seeing that golden turbine I love so much.

LONG TERM UPDATE 7/12/2018: Those "wavy handle" Sandent handpieces are are still my overall favorites.  Couplerisn't included, but you can ONE different model handpiece that comes with a coupler and get some use out of that.


If you don't need swivel coupling, then you can get the exact same gold ceramic bearing turbine (and therefore basically identical performance) from this Dentshine handpiece.  In my brief time with it, the water performance, noise and water spray have all been great--as good as the Skysea above for one third the price.  You do give up swivel and quick connect.  It might be a touch quieter, too. As previously mentioned, e-generators give LED light to non-electric 4 hole tubing, but they dim and brighten with your RPM's.  The traditional power source in 6 pin tubing maintains its brightness regardless of rotation speed.  But at $20-30 shipped per handpiece, from US sellers no less, it's a great buy, especially for low-duty use as an adjustment or ortho high speed.  Buy the Dentshine e-generator 4 hole  handpiece on ebay here.

Also for around $20, you can also get the YBB TM4-SU from US sellers.  Shop for the YBB TM4-SU here.  This uses a smaller turbine, but it seems to work just as well.  However, handpieces with this same turbine have not lasted ]as long for me as the gold turbine.  I also don't like the skinnier neck, but those with smaller hands might.  My hands get tired faster holding these things.

I personally dislike non-swivel handpieces.  You can't twist the handpiece tubing to relieve tension on your wrist. But if that doesn't matter to you, or you want to eliminate the potential leakage of a coupler, the non-swivel version is a fantastic bargain.   I've been told if you've never had swivel to begin with, you won't miss it.  Electric handpiece owners also like these cheap handpieces for quick adjustment visits, in order to spare the wear and tear on their expensive 1:5 attachments.

If you need a small head handpiece that cuts well, check out my review on the Skysea mini head.  It's got a very high pitched whine, and you'll need to use short shank burs.  But it's about 80% as good as my NSK picomax.  Had I known about these beforehand, I wouldn't have bought the NSK.  It's too expensive for something I only need occasionally.

Ruixin handpieces are much more expensive (for Chinese) and loud.  My copy leaked, and the turbine cartridge didn't last very long at all.   The Dentshine $12 handpieces I previously liked have been breaking down just a few months in.  I suppose I can't expect the world out of a $12 handpiece, so I'll chalk that one up to experience.  Coxo handpieces have a loud high pitched whine I can't stand.


The Caveats of eBay buying

If you want risk free buying, eBay may not be for you.  There are many things to be aware of when buying from eBay Chinese sellers:

If you don't want to deal with the risks and frustrations of these Chinese made handpieces, Lares Research makes very good moderate priced handpieces.  And if you want top flight quality, there's always NSK and Kavo--for a price.


The only way to know what works and what doesn't is to buy and try.   Good luck!

After a few additional months of using pretty much exclusively eBay handpieces, this is what I would suggest.  For coupler you need (usually one per operatory), get the Skysea SKED A6 packaged with 3 replacement turbines.  That will give you 3 spare turbines AND a coupler.  Then get "wavy handle"
YBB-T-M4-SU triple spray kavo compatible high speed with golden turbine to stock the rest of your "big boy" high speed rotation.  Get one or two Skysea mini head for small spaces.  You should be able to stock enough for a three column schedule for the price of a single top tier handpiece.

All things must come to an end, but most of the time, a new turbine brings it back from the dead in just a minute!  The spare turbines can be found for about $16 a piece.  No drill press or special tools needed, beyond the wrench that comes with the handpiece.  (don't throw them away!)  Unscrew the back, pull out the old turbine, push in the new one, and replace the back cover.  Blow in some oil and you're ready to rock and roll again! 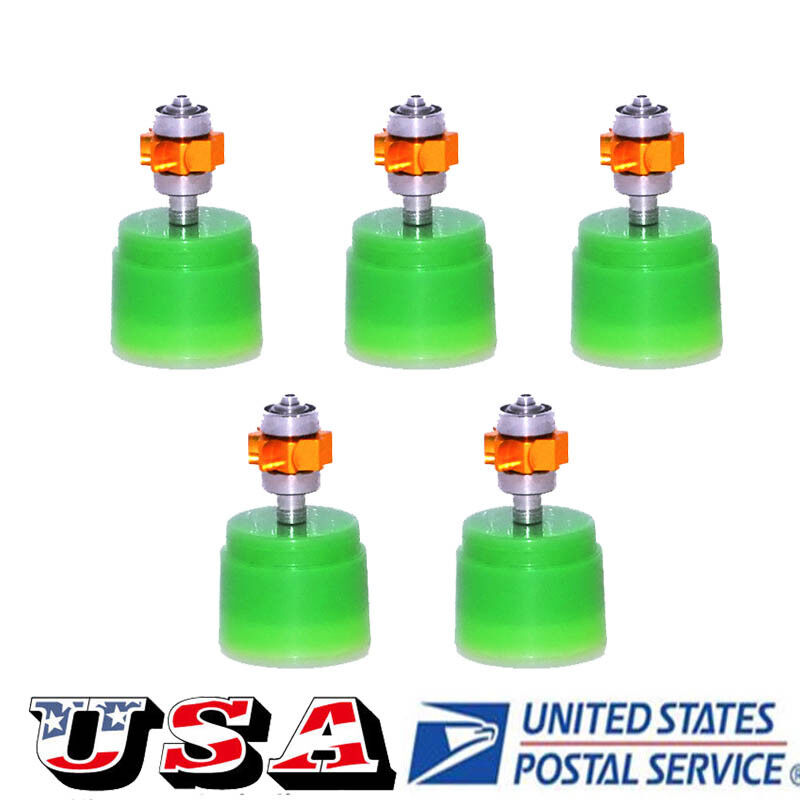